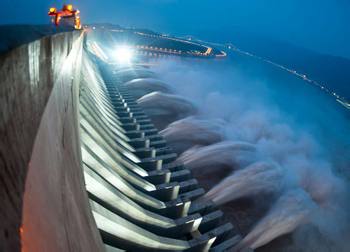 From the 1st to the 3rd quarter, the Three Gorges Project performed well, and the comprehensive benefits such as flood prevention, drought relief, water supply, shipping, and power generation were significantly brought into play, and the follow-up project construction such as ship lift construction and dam area planning projects proceeded in an orderly manner.

In the first three quarters of the year, the total water supply of the Three Gorges Reservoir was 306.2 billion cubic meters, which was 16.6% less than the same period of last year, and the average annual value was 13% less. The Three Gorges Reservoir accumulated replenishment for 147 days of downstream water and the total amount of replenishment was approximately 21 billion cubic meters. During the falling period, the average outflow rate was 7,950 cubic meters per second, which was 1,450 cubic meters per second more than the mean value of the upstream water, and increased the average water depth of the downstream channel by about one meter. On June 10, the Three Gorges Reservoir launched a full-scale flood control work in 2013. In the main flood season, a total of four flood control operations were implemented, accumulating a total of 10.78 billion cubic meters of flood storage. On September 10, trial water storage was started on the basis of the previous flood control application level. The water storage level was 156.69 meters. At the end of September, it had been stored to 167 meters. At the end of October or November, it was stored at 175 meters. Monitoring data shows that no major earthquakes, geological disasters, and blooms occurred along the reservoir area during the fall of the Three Gorges Reservoir before floodwaters, flood control floods, and experimental water storage.

In the first three quarters, the Three Gorges-Gezhouba Cascade Power Station units were operating normally. At present, the Three Gorges-Gezhouba Cascade Power Station unit maintenance work plan has been formulated and all work is being carried out in an orderly manner; the power station unit transformation and capacity expansion of the Gezhouba Hub will be fully started. After the completion of the upgrading, the installed capacity will increase by approximately 475,000 kilowatts.

In the first three quarters, the construction of ship lifts steadily advanced. After the pouring of waterproof concrete on the roof of the top machine was completed, 80% of the installation of the glass curtain wall was completed, and the interior decoration work of the engine room was started. The installation of the cabin equipment was carried out in an orderly manner, and the balance weight system completed the test of the ropes of the 3 pulleys of the right 8~9 axis and the hoisting work.

Safes that can resist fire for 0.5 hour.