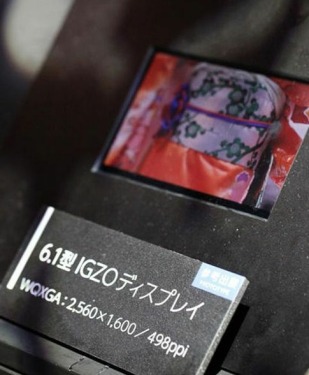 According to reports, Sharp recently exhibited a 6.1-inch IGZO TFT liquid crystal display in Japan with a resolution of up to 2560Ã—1600. The pixel value was nearly twice as fast as 1080p and reached the standard of 4K ultra-clear, and the pixel density also reached 498ppi. Compared to the previous 441PPI with Find5 and HTC DNA 5 inch screens even higher.

According to Xiao Bian, Sharp has applied the Indium Gallium Oxide (IGZO) active layer technology. Compared to the conventional amorphous silicon liquid crystal screen, the thin film transistor TFT can be made smaller, and the current flowing ability is also the traditional amorphous silicon. The speed of 20 to 50 times, so you can achieve high-precision LCD screen. The rumored next year Apple iPhone 5S will introduce this technology.

At present, Sharp has begun to roll out the production of IGZO panels, and also collaborates with Qualcomm in this area. In the future, there will be quite a lot of mobile phones and tablet computers using this panel. At the same time, Sharp has announced that it will carry this panel in domestic mobile phones sold in China. The high-end models will be produced by Sharp and the middle and low-end models will be Foxconn OEMs.

In summary, Xiao Bian thinks that this hope placed by Sharp will hopefully reshape its position as the king of the panel. The LCD panel will be the mainstream of the future.

The CH0004 is a self-contained Battery Charger/conditioner mounted in a ruggedized environmentally resistant case, which provides a reliable and consistent recharge of one or two batteries simultaneously. The CH0004 auto senses battery type to assure proper charge profile.

â€¢ Smart charge modules that detect open or shorted cells. If a defective cell is detected the CH0004 will not start charge cycle

techniques of the CH0004

Recharge Each String of Cells