The past five years have witnessed the rise of smartphones as the most commonly used networking device in our daily lives, followed by tablets. Innovations in next-generation devices will lead the Internet beyond those rectangular handheld devices.

The Internet of Things (or loT) represents a type of device that, according to McKinsey's definition, "can monitor the surrounding environment, report its status, accept commands or tasks, and even act on the information received."

Unlike smartphones and tablets, IoT devices have a limited user interface and are often used only to collect data and transfer it to other devices. The concept is the universality of IoT devices, and it brings more features, higher efficiency and makes everyday life easier. The Internet of Things turns ordinary objects, tools, and facilities into smart devices with sensors that communicate with the PCs, smartphones, and tablets we use every day.

Once the Internet of Things is realized, it is easy to think of various categories of consumer and commercial uses, including home automation, intelligent thermostat and air conditioning, traffic management, advanced care, security systems, car networking, and networking billboards.

What kind of equipment will be used to manage the Internet of Things? There will be some dispersion in the user interface. For example, refrigerators and thermostats may have touch screens, while smartphones and tablets are likely to be the actual remote controls for the Internet of Things for devices and viewing data.

This trend of the Internet of Things will drive the rapid growth of the number of connected devices. In fact, IoT devices will soon become the largest category of connected devices, and by 2018 it will roughly equal the sum of smartphones, smart TVs, tablets, wearables and PCs.

Machina defines "revenue from the connected life market" as the revenue of sales and related products for all connected devices and services, and they estimate that this market will grow to $2.5 trillion by 2020.

According to Markets and Markets, the market value of the Internet of Things reached $44 billion in 2011 and is expected to grow to $290 billion by 2017. 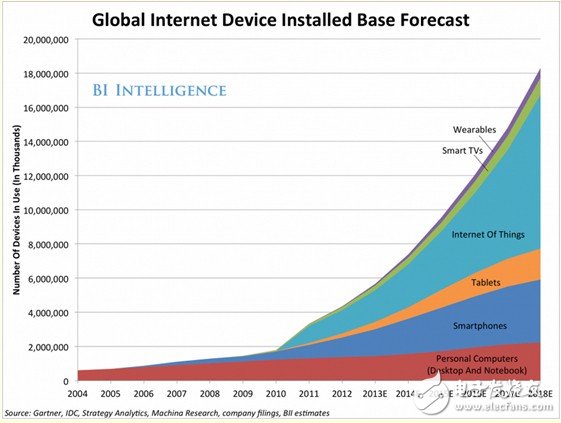 In the consumer sector alone, there are already many product categories that have entered the Internet of Things. include:

Household appliances such as refrigerators, washing machines, and coffee machines;

Lighting products such as bulbs and thermostats;

Safety products such as baby monitors and smoke detectors;

Pedometer, sphygmomanometer and other products.

In the business and government sectors, the Internet of Things has also begun to spread rapidly. These scenarios are not necessarily directly related to mobile computing, but many are partially integrated with mobile devices and applications:

The Internet of Things contains several rapidly growing categories of connected devices, but according to BI estimates, the three areas of car networking, smart TV and wearables will be separated for discussion.

In addition, the Internet of Things overlaps with many other technologies, including telemetry, telematics (telemaTIcs), machine interaction, smart grids and intelligent transportation.

Most companies have a positive attitude towards the Internet of Things: