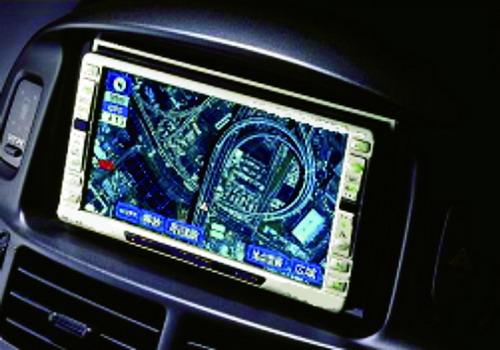 There are many reasons for the rise of mobile video:

Entertainment appâ€”The car is an entertainment environment where you can play video games, watch movies, cartoons, regional TV or even satellite TV. Thanks to advances in mobile video technology, all of this can now be achieved in cars, trucks, commercial vehicles, and recreational vehicles.

Securityâ€”When the navigation system is connected to a video, it can issue image and sound commands that increase travel efficiency and accuracy.

The Solomon SSD1921 is an image processing chip with image capture and processing capabilities. Image content can be processed by SSD1921 and displayed on various types of LCD panels, such as STN, CSTN, low-cost Delta panels, and high-definition strip TFTs.

Figure 2 shows an application solution for car audio and video. The video decoding first converts the CVBS (composite video signal) or S-video signal into YCrCb (BT656/BT601 digital format) and delivers it to the video input port of the image processing chip SSD1921. If the video source is already compliant with the BT656/BT601 standard, the design can be simplified by not having to connect to the video decoder. In most cases, the video input may not always correspond to the display panel at a 1:1 ratio, while the SSD1921 has the "Size" feature that can be cropped before the image data is written to the embedded SRAM. And zoom. Therefore, NTSC/PAL video sources of various resolutions can be adjusted by this built-in scaling engine to be suitable for display on LCD panels of various resolutions. 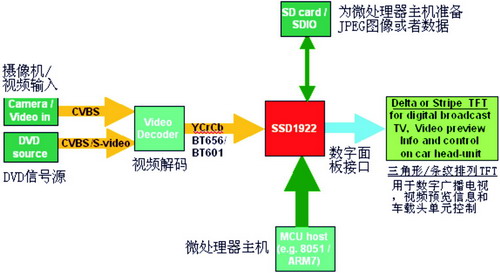 The built-in 2D image processing engine provides flexible on-screen display effects including: on-screen display, translucent, multi-language font acceleration, dynamic JPEG animation, image scaling, virtual display, portrait display mode, overlay function, hardware cursor function, line Draw, raster operation bit block transfer, color fill, and expansion. The internal JPEG engine can provide a highly customized user interface, for example: the user can capture his/her favorite DVD image as a screen saver, or use a personal photo as a wallpaper. To achieve this, the user needs to store the JPEG image on the SD/MMC card in advance, and the SSD1921 can take the pre-stored image from the SD/MMC and decode it and display it on the LCD. 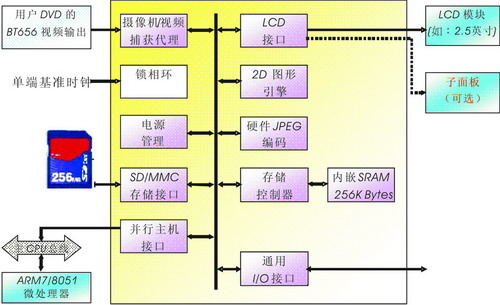 The video input on the chip can accept the universal 8-bit digital video signal format YUV422 CCIR601 or CCIR656. Since both CMOS and CCD sensors also use these two interface standards, designers can directly connect the sensor's image source to the SSD1921's video input. In addition, the video image can be transmitted to the video input port of the image processor at a frame rate of up to 15 frames per second. In today's car audio and video products, in addition to the function of DVD recording and playback, still picture display (such as: operation menu display and photo display) is also a very important feature. The SSD1921 can support up to 1280x1024 resolution (equivalent to 1.3M pixels) for CMOS image capture. If the video source is too large to display, the chip's built-in extraction and cropping engine can scale or crop the input video to match the display output with a fixed size (1, 2, 4, 8, 16). Images up to QVGA (320x240) 16bpp color depth can also be previewed using a crop and extract engine. In addition, the chip can also achieve color conversion, that is, color changes from fixed YUV format to RGB format, including YUV422 to RGB565 and YUV422 to RGB888 format (32bit color depth with 8-bit color mixing). The user can adjust the Y, U, and V components for brightness and contrast requirements.

JPEG codec is a pure hardware codec that can be completely removed from the MCU (microcontroller unit) operation during JPEG encoding and decoding. The JPEG encoder compresses the video source into JPEG format and stores it in embedded memory and supports JPEG encoding of various sizes up to 1280X1024. However, when a JPEG decoder receives a JPEG image from an MCU or an MMC/SD card and decodes the display, the size of this decoded image is limited by the size of the display or the size of the embedded memory. Extraction and cropping are two algorithms that reduce image size and reduce memory requirements. Bus width and power consumption can also be saved accordingly. Cut and decompress selected areas of the full-frame image. Non-integer extraction can be done using the StretchBLT function in the 2D image processing engine. Since the maximum resolution of the video input is 1280x1024 and the embedded memory on the chip is only 256KB, it is not possible to start JPEG compression after a full frame capture. The only way to do this is to start the compression while the image is being captured.

The image processor has a built-in 2D image processing engine designed to be based on Microsoft Windows' GDI (Graphics Device Interface), which supports the following seven main functions:

An optional cursor with three colors and transparency, the cursor can flash;

Bit Block Transfer (BitBLT) - The purpose of the Bit Block Transfer Engine is to enable control from the MCU when transferring pixel data between the CPU and the video memory. It can also be used to move pixel data from a specified location to another specified location in video memory, so users can easily move a block of pixels in the video memory. Processing for larger images can be accomplished by repeating the pattern fill bit block transfer several times. In addition, the color expansion function of the bit block transfer engine has the advantage of bit-based storage, so memory can be saved. Allows users to apply Boolean logic to source and destination data, demonstrating a high degree of flexibility in data management.

Car audio and video systems have begun to prevail and there is a very large potential market. Car entertainment will eventually become an important part of every car in the future. A monolithic integrated image processor like the SSD1921 is ideal for a wide range of car audio and video applications, and its remarkable features and simple system design help manufacturers accelerate their product launch.