Faced with the reality that the earth's ecological environment is deteriorating and resources are increasingly scarce, governments around the world have adopted many policies and measures to support and develop energy-saving and environmental protection industries. Solar LED street lamps are a comprehensive application of solar energy development and energy-saving technologies in the field of lighting. According to statistics, lighting consumption accounts for about 20% of the total electricity consumption. Reducing lighting power is an important way to save energy. Solar energy is clean, environmentally friendly and renewable, and LED lighting is currently the most in the world. Advanced lighting technology is the fourth generation light source after incandescent lamp, fluorescent lamp and high-intensity gas discharge lamp. It has simple structure, high efficiency, light weight, good safety performance, no pollution, maintenance-free and long life, controllable performance. Strong features are considered to be the best way to achieve energy saving in the field of lighting. There are statistics showing that only LED street lights can save energy for China by saving about one dam from the Three Gorges Dam every year. Due to the energy saving and environmental advantages of LED lighting fixtures, its global output has increased in recent years.

The solar LED street lamp controller designed in this paper firstly detects the solar cell output and battery power and other parameters to determine the system working state, and uses the maximum power point tracking MPPT algorithm to achieve maximum energy collection. After the energy storage is completed, the PWM technology is utilized. Adjusting the brightness of the LED to further save energy, thus realizing the automatic control and intelligent energy management of the whole system, and is more conducive to the application and promotion of solar street lamps.

1. 1 The composition of the solar LED street light system 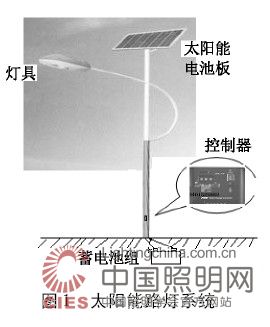